Airs Wednesday, October 9, 2019, at 8 p.m. Twang Darkly returns to Red River Radio for a live performance of their unique blend of original instrumental music that has been described as "Interplanetary Mountain Music."

Since 2010, Twang Darkly has been performing its rural space music, a wide-ranging instrumental amalgam of spiritual jazz, Appalachian sounds, and world roots rock.  Founder and composer Michael Futreal builds and utilizes an array of unusual instruments such as electric gourd, chromatic dulcimer, bamboo and gourd flutes.  The trio is completed by Joel Boultinghouse on guitar and bass along with Lane Bayliss on drums and sundry percussion. Michael has released 7 Twang Darkly studio albums at this point, along with numerous solo albums over the past 10 years; more details at Michael Futreal. Join us Wednesday night at 8 p.m. and while you’re at it, give us a call and help support live music on Red River Radio at 800-552-8502 or click here. DONATE NOW! 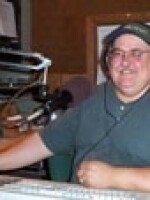