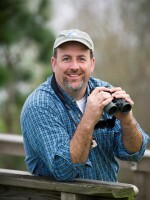 Cliff Shackelford
Clifford Shackelford is a 7th generation Texan who began bird watching at the age of nine. He holds both a B.S. and an M.S. degree in biology from Stephen F. Austin State University in Nacogdoches and has over two decades of experience as a professional biologist. Since 1997 Cliff is has been the statewide Non-game Ornithologist for the Texas Parks and Wildlife Department. He is the author of over 70 publications on birds and birding and he authored the book Hummingbirds of Texas, published in 2005 by Texas A&M University Press. He has traveled extensively in the Western Hemisphere, collectively he has visited 9 different Latin American countries, and he and his wife Julie and their 2 young children live in East Texas.
See stories by Cliff Shackelford