Airs Thursday, July 25, 2019, at 8 p.m. From the Shreveport House Concert series we present Renowned Louisiana songwriter and musician David Egan, who passed away last year from cancer.
David Egan was one of the state's most well-respected songwriters. he wrote music that has been performed by Joe Cocker, Percy Sledge, Tab Benoit, Irma Thomas, Etta James, Solomon Burke, Marcia Ball, Marc Broussard, and many others. David grew up in Shreveport and studied jazz and composition at the University of North Texas. He would travel to Nashville but eventually returned to his home state where he joined forces with the Flet Brother in an adventure called the A Train. By 1990 he settled in Lafayette, and launched into writing and performing. In 2003 he released his debut album, "Twenty Years of Trouble." In 2006 he also released "After the Rain" and in 2008 he released "You Don't Know Your Mind." Scott Billington, who produced After the Rain, said in an interview with the Times-Picayune, that "David Egan is in the same league as Doc Pomus, Dan Penn, Allen Toussaint and Bobby Charles, among the crème de la crème of R&B songwriters. Each of his songs has something special, a lyrical or harmonic turn that you can't forget. And he's always soulful and deep."
David Egan crossed over on March 18, 2016. 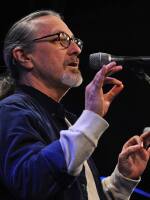