Airs Monday, September 10 at 8:00 p.m.   Archie McDonald passed away Aug. 16 from illness and we were deeply saddened by the loss of this long time friend and contributor to Red River Radio, SFA University, the world of History scholarship, and all our communities to which he contributed tirelessly. At SFA University they honored him in many ways including creating an annual speakers series in his name. He was the host for these informative programs. In April of this year he had the privilege to speak with the Honorable James A. Baker, III.  We offer a repeat broadcast of this special now to honor his memory, friendship, love of community, and his dedicated support of education and citizenship over the course of his life.

The Honorable James A. Baker, III, America’s 61st secretary of state, is the featured guest for this Archie McDonald Speaker program, recorded at Stephen F. Austin State University.  Baker served as secretary of state and chief of staff to President George H. W. Bush, chief of staff and secretary of the treasury to President Ronald Reagan, and undersecretary of commerce to President Gerald Ford. He also led their combined five presidential elections and in 2006 co-chaired the Iraq Study Group. “Secretary Baker is one of the most influential policy makers of the 20th century, and, as such, has strongly impacted American politics and foreign affairs for decades,” Dr. Archie McDonald said. “We are honored he has accepted our invitation to participate in the speaker series.” (more)

Baker, a resident of Houston, is the author of “The Politics of Diplomacy: Revolution, War & Peace, 1989-1992” and “Work Hard, Study. . .and Keep Out of Politics!” and is a 1991 recipient of the Presidential Medal of Freedom. He is a senior partner in the law firm of Baker Botts and honorary chairman of the James A. Baker III Institute for Public Policy at Rice University, and he serves on the board of the Howard Hughes Medical Institute.

The Archie McDonald Speaker Series was created in 2010 by the SFA College of Liberal and Applied Arts led by Dr. Brian Murphy, dean of the college. The annual event is designed to honor and preserve the legacy of a distinguished scholar, educator and community commentator who brings American culture to the average person. In the tradition of McDonald's writings and oral presentations, the speaker series will host a prominent national figure annually at SFA to discuss contemporary cultural issues—from politics to art. In the process, the national profile of SFA will be enhanced, and the community will be enriched. 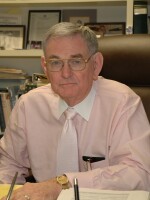 Archie McDonald, Ph.D.
Archie P. McDonald (b. Nov. 29, 1935 - d. Aug. 16, 2012) aught history at Stephen F. Austin State University for 47 years. He served as host and author of a commentary series on Red River Radio for more than a decade and also served on our community advisory board. He served as director of the East Texas Historical Association and editor of the Association’s Journal for 37 years. He was a past president of the Texas State Historical Association, past vice chair of the Texas Historical Commission, and author/editor of more than 20 books on historical topics—and one book of humor titled Helpful Cooking Hints for House Husbands of Uppity Women. Along with teaching, McDonald served as SFA's community liaison. His Red River Radio commentaries aired for many years on Fridays at 7:35 a.m.
See stories by Archie McDonald, Ph.D.