Twenty-five years ago, the U.S. and its allies launched Operation Desert Storm to free Kuwait from an invasion by Iraq. What was confidential at the time was that the opening mission of the war was launched from Barksdale Air Force Base in Louisiana. Commentator Gary Joiner profiles the top-secret air combat mission nicknamed "Secret Squirrel."

History Matters is made possible in part by the Louisiana Endowment for the Humanities and Louisiana Cultural Vistas Magazine. 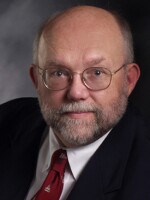 Gary Joiner, Ph.D.
Gary Joiner is a cartographer and an associate professor of history at LSU in Shreveport. He is the author or editor of 12 books including “Shiloh and the Western Campaign of 1862,” “One Damn Blunder From Beginning to End: The Red River Campaign in 1864,” “Through the Howling Wilderness: The Red River Campaign and Union Failure in 1864,” “Red River Steamboats,” and “Mr. Lincoln's Brown Water Navy: Mississippi Squadron.”
See stories by Gary Joiner, Ph.D.