The takeover of Afghanistan by the Taliban was as startling as an earthquake. It sent shockwaves from Kabul all the way to Hollywood, where the CBS sitcom the "United States Of Al" was shooting its second season. That season, premiering tomorrow, will be vastly different from what was originally planned, thanks to an unusual writers room that includes a former Afghan interpreter and a U.S. military combat veteran. NPR's Renee Montagne has the story.

RENEE MONTAGNE, BYLINE: OK, for those who haven't seen it, the show follows an Afghan interpreter called Al - short for Awalmir - and his Marine Corps buddy Riley. Having bonded in combat, Riley helped Al emigrate to America, where they're reunited as an odd couple bunking in Riley's dad's garage - also back home, his sister Lizzie.

ELIZABETH ALDERFER: (As Lizzie) So, Al, besides your family, did you leave behind anyone's special, a girlfriend maybe?

ADHIR KALYAN: (As Al) No, I'm afraid not. And I could never tell anyone where I lived because the Taliban were hunting me.

MONTAGNE: That's Elizabeth Alderfer as Lizzie. Al is played by Adhir Kalyan and Riley by Parker Young. As this clip suggests, spinning jokes out of relationships forged in war is a tricky business. With that in mind, the creators of the "United States Of Al" assembled a team with strong connections to Afghanistan. That included combat veterans and several writers of Afghan descent. The one writer born and raised there is Habib Zahori. Yet even after spending nearly all of his life in war, he can still be quite funny.

HABIB ZAHORI: Well, you know, I am one of the funny people in Afghanistan. There are so many of us. There is a very, very strong culture of joke telling. And despite all the hardship that we went through and we are still going through, we have preserved that culture.

MONTAGNE: Zahori is himself a former interpreter for The New York Times, The New Yorker and briefly NPR. He's the one tapped to ensure authenticity, everything from vocabulary to decor, especially when it comes to scenes set in Kabul, like this flashback of Al's farewell dinner with his sister Hassina and their clueless cousin Zubair.

WALI HABIB: (As Zubair) When you meet Beyonce, tell her there is a handsome man in Afghanistan who is ready to marry her.

KALYAN: (As Al) Zubair, it will be the first thing I tell her.

SITARA ATTAIE: (As Hassina) We're really going to miss you.

KALYAN: (As Al) I will find a way to get you to America.

ATTAIE: (As Hassina) You know my place is here. What would happen if all the smart women left Afghanistan? It would just be a bunch of Zubairs.

MONTAGNE: Zubair, by the way, is played by Wali Habib, Hassina by Sitara Attaie. This is the kind of humor you could easily encounter in Afghanistan. Even the Taliban are the butt of jokes. Well, that is until this past August. Reza Aslan, a well-known scholar of Islam, is an executive producer of the show.

REZA ASLAN: We, as producers, realized very quickly that not only do we need to write a new premiere episode to address the fall of Afghanistan, but that the story of that episode was actually playing itself out in our midst.

CHASE MILLSAP: We were literally, you know, handling real-world issues the same day we're trying to write it down on the page. But then there was the deeper part of it.

MONTAGNE: Writer Chase Millsap is a combat veteran serving with both the Marines and the Army Special Forces. The deeper part of it was that Afghans on the show had relatives in Kabul. Habib Zahori had sisters, cousins, a brother and brother-in-law all working for the U.S. and the now-fallen Western-backed government, all suddenly in danger. And that's where Chase Millsap, with his connections to the U.S. military at the Kabul airport, came in.

MILLSAP: Quite simply, I knew people that were at the gates and, you know, who wanted to help.

MONTAGNE: Years earlier, Millsap had tried to help the translator who saved his life but wasn't able to get him to America. When Afghanistan fell to the Taliban, he had another mission - trying to get Zahori's family out of Kabul.

MONTAGNE: Which is how Habib Zahori was able to follow his family trying to enter the airport.

ZAHORI: As they were going through this crowd, they were tear-gassed. They were whipped. They were hungry. And of course, there will be a burst of fire. That whole week was one of the worst weeks of my life. And I am someone who grew up during the war, the Taliban.

MONTAGNE: Much of this real-life experience found its way into the season premiere, which also involved sleepless nights and dramatic phone calls.

KALYAN: (As Al) Don't worry. Riley and I will find you an earlier flight.

ATTAIE: (As Hassina) In other cities, the Taliban are going door to door looking for people who work with foreigners. I work with the U.S.

KALYAN: (As Al) Hassina, listen to me. Nothing is going to happen to you.

KALYAN: (As Al) Hold on a minute, Hassina.

YOUNG: (As Riley) What do you got?

UNIDENTIFIED ACTOR: (As Todd) They're deploying Marines to Kabul.

YOUNG: (As Riley) What for? What's the mission?

UNIDENTIFIED ACTOR: (As Todd) I heard evac, but I don't know.

ATTAIE: (As Hassina) Did he say they're sending the Marines?

ATTAIE: (As Hassina) To evacuate us?

KALYAN: (As Al) They're not coming for you.

MONTAGNE: Back in the writers room, Chase Millsap says there was plenty of action, but not all the time.

MILLSAP: And then there were downtimes where we had, you know, a minute to breathe, you know, tell jokes. We actually made a lot of jokes about Zubair, who's the cousin character on the show. You know, there's - you know, what would Zubair do? - was always a running joke.

MONTAGNE: In a way, the two writers had become their own characters, the former Afghan translator desperate to get his family out of Kabul and the former Marine doing all he can to make that happen. The result is a far different premiere episode than originally shot. For one, the laugh track is gone.

ASLAN: This show is about to premiere at a time in which thousands of Afghan refugees are on their way to the U.S. so that a lot of these viewers are going to have neighbors, people in their community that are Afghans that have just recently arrived in the United States. And if we can use their experience of getting to know Al as a way to get them to think about those very real refugees, to empathize with them, that's why we do this.

MONTAGNE: And as the "United States Of Al" proceeds, it will once again become a comedy. But Al's sister will not be seen in Kabul. She is now a refugee, just like Habib Zahori's real family, now scattered across several countries. 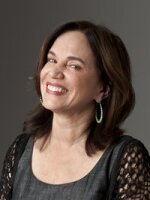 Renee Montagne
Renee Montagne is co-host of NPR's Morning Edition, the most widely heard radio news program in the U.S. She has hosted the newsmagazine since 2004, broadcasting from NPR West in Culver City, California, with co-host Steve Inskeep in NPR's Washington, D.C. headquarters. Montagne is a familiar voice on NPR, having reported and hosted since the mid-1980s. She hosted All Things Considered with Robert Siegel for two years in the late 1980s, and previously worked for NPR's Science, National and Foreign desks. Montagne traveled to Greenwich, England, in May 2007 to kick off the yearlong series, "Climate Connections," in which NPR partnered with National Geographic to chronicle how people are changing the Earth's climate and how the climate is impacting people. From the prime meridian, she laid out the journey that would take listeners to Africa, New Orleans and the Antarctic. Since 9/11, Montagne has gone to Afghanistan nine times, travelling throughout the country to speak to Afghans about their lives. She's interviewed farmers and mullahs, poll workers and President Karzai, infamous warlords turned politicians and women fighting for their rights. She has produced several series, beginning in 2002 with 'Recreating Afghanistan" and most recently, in 2013, asking a new generation of Afghans — born into the long war set off by the Soviet invasion — how they see their country's future. In the spring of 2005, Montagne took Morning Edition to Rome for the funeral of Pope John Paul ll. She co-anchored from Vatican City during a historic week when millions of pilgrims and virtually every world leader descended on the Vatican. In 1990, Montagne traveled to South Africa to cover Nelson Mandela's release from prison, and continued to report from South Africa for three years. In 1994, she and a team of NPR reporters won a prestigious Alfred I. duPont-Columbia University Award for coverage of South Africa's historic presidential and parliamentary elections. Through most of the 1980s, Montagne was based in New York, working as an independent producer and reporter for both NPR and the Canadian Broadcasting Corporation. Prior to that, she worked as a reporter/editor for Pacific News Service in San Francisco. She began her career as news director of the city's community radio station, KPOO, while still at university. In addition to the duPont Columbia Award, Montagne has been honored by the Overseas Press Club for her coverage of Afghanistan, and by the National Association of Black Journalists for a series on Black musicians going to war in the 20th century. Montagne graduated from the University of California, Berkeley, as a Phi Beta Kappa. Her career includes serving as a fellow at the University of Southern California with the National Arts Journalism Program, and teaching broadcast writing at New York University's Graduate Department of Journalism.